Fertility and surrogacy law moves far slower than medical technology and surrogacy within the Commonwealth of Australia is the subject of legislative acts and regulations which are different in each state and territory.

The next significant legislative change in Western Australia will hopefully be the amendment to the Surrogacy Act 2008 (WA) which removes the discrimination against same sex couples having access to surrogacy.

Rachel has been providing assistance and advice to parties to surrogacy arrangements under the Surrogacy Act 2008 (WA) since it was introduced in this state. She presents seminars and authors papers for state, national and international audiences.

Rachel has also advised parties to arrangements where state law in other parts of the Commonwealth applies.

Rachel is a Deputy Member of the Reproductive Technology Council of Western Australia. This is the body which (among many other things) approves surrogacy arrangements prior to treatment commencing in Western Australian clinics.

It can be incredibly difficult for intended parents to get good medical and legal advice, in part because a lot of information about the process is sourced online. Rachel recommends that intending and surrogate parents in Western Australia first approach Surrogacy Co-ordinators at clinics rather than rely on information on the internet.

There are common legislative themes throughout Australia in terms of what is required for a surrogacy arrangement to comply with the law and lead, ultimately, to legal parental status for the intending parents:

The Process or Steps to Surrogacy in Western Australia

The diagrams below are set out in very simple terms. This website is not a substitution for proper legal advice. 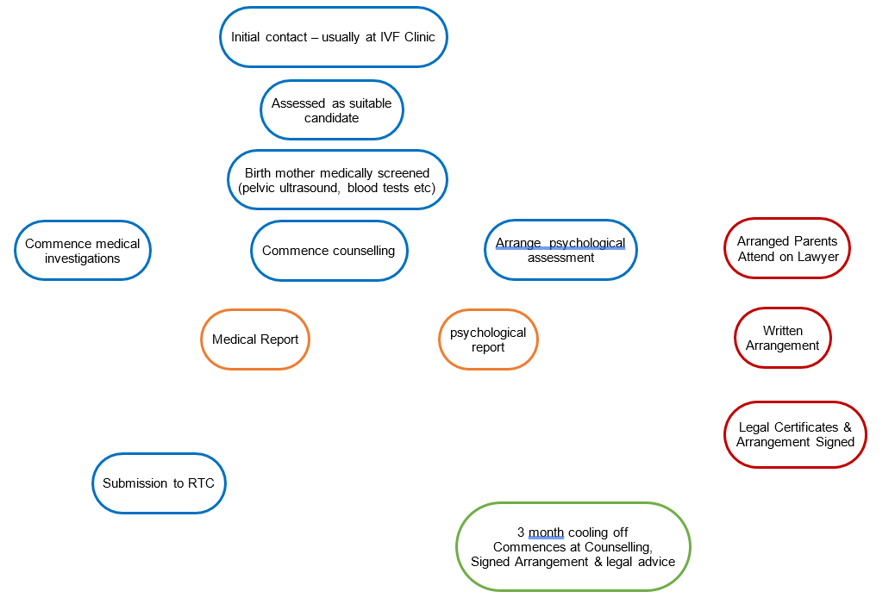 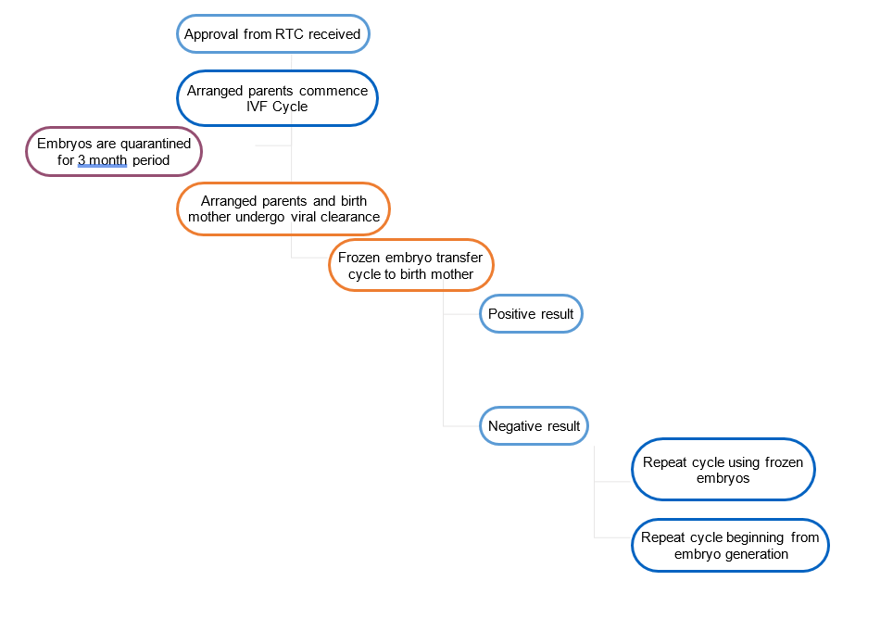 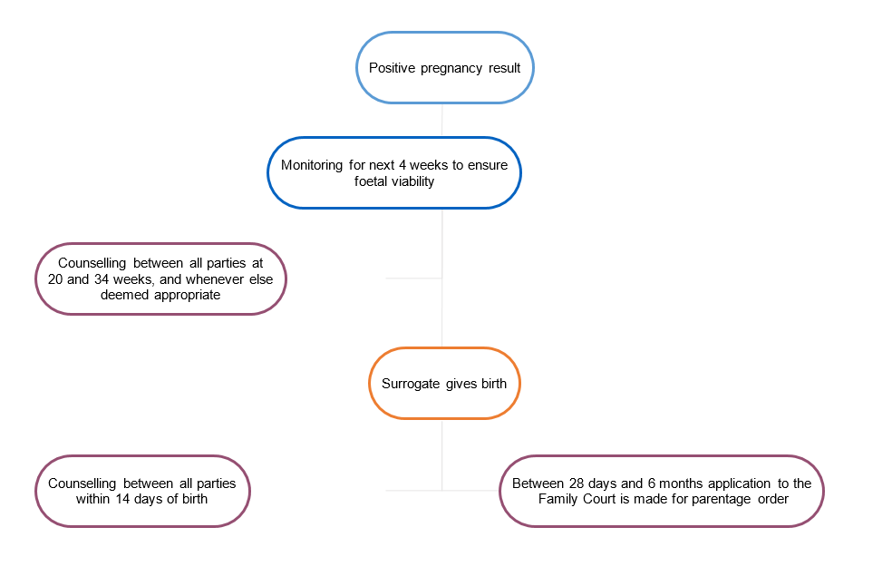 Some intending parents are lucky in that they have a relative or close longstanding friend who volunteers to carry their baby. Others have to try and find a surrogate.

In Western Australia, it is permissible to advertise for an altruistic surrogate (in several other states that is actually prohibited by the surrogacy legislation).

Surrogacy Co-ordinators may have access to a register of women who approach.

In Western Australia there are Surrogacy Co-ordinators at the fertility clinics who provide IVF for surrogacy arrangements. They will assist intending parents and the surrogate (and her partner or spouse if she has one) to engage in implications counselling, which is required under the law of Western Australia.

Rachel recommends that parties to a surrogacy arrangement use a qualified, experienced family lawyer to draft up a written surrogacy agreement (beware the internet templates!). Surrogates and intending parents must have separate lawyers who give advice about the surrogacy arrangement and those lawyers must provide a certificate confirming that they have given it and are qualified to give it.

Legal Certificates should be completed prior to parties signing the agreement.

It is advisable to retain a file copy of the arrangement and the legal advice, to be retained permanently, in much the same way that a Last Will and Testament would be retained in the legal file.

The RTC meets monthly. Deadlines for submitting forms are published on their website[4]. The Surrogacy Co-ordinator in usually informed in writing within seven days of a council meeting if an arrangement is approved by the council.

RTC Approves the Arrangement – Now What?

For a gestational surrogacy arrangement, the fertility clinic needs to commence hormone treatment for the egg donor (usually the arranged mother’s egg is used but sometimes it is a third-party egg donor) so that oocytes can be harvested. At the time of extraction of the donor egg, the arranged father or sperm donor will provide a sample. Embryos are then created in the clinic laboratory.

Although not specifically mandated in the Surrogacy Act 2008 (WA), clinics usually recommend a three-month quarantine period before embryo transfer to the surrogate.

Some clinics will permit parties to waive the quarantine period but they advise against it.

Before an embryo is transplanted into the surrogate’s uterus, the surrogate also needs to undergo hormone treatments to prepare the lining of the uterus for transfer.

Within about a week of transfer, a blood test is taken to determine whether the transfer has resulted in a pregnancy.

After a negative result, the surrogate will have to re-start the hormone cycle and IVF treatment again. It is common for a surrogacy arrangement to specify the number of cycles that a surrogate is willing to undergo in an attempt to achieve a pregnancy.

If a pregnancy is achieved after the first cycle, there are likely to be embryos in cryogenic storage. Again, it is common for a surrogacy arrangement to detail what is intended for excess embryos. This is especially important where a third-party donor egg is used.

Surrogacy arrangements are available in every other state and territory in the Commonwealth[5].

(a)        an adoption order or parentage order is made or discharged under a law in force in another State; and

(b)        the order was made or discharged in relation to a person whose birth is registered under this Act,

the particulars (if any) provided under that law must be registered by the Registrar in relation to the registration of the person’s birth.

11.  Services connected with surrogacy arrangement that is for reward

Summary conviction penalty: a fine of $12 000 or imprisonment for one year.

The availability of surrogacy in overseas jurisdictions is rapidly changing. For Australian ‘fertility tourists’, India and Thailand used to be the ‘go to’ destinations for affordable surrogacy. When India introduced a medical tourism visa, available only to married couples, the unregulated industry in Thailand exploded.

Then came the ‘Baby Gamy’ case[7]. A series of measures in neighbouring international destinations were introduced quickly, ostensibly intended to prevent exploitation of surrogates in third world countries:

Cross-border surrogacy remains available in some states of the USA and a handful of countries including Canada, the Ukraine, Russia Laos and Guatemala.

There have been some occasions where Australian Courts have been persuaded to make orders which give legal parental status to intending parents who have engaged in commercial surrogacy arrangements overseas but those cases are exceptional and it should not be assumed that there is any precedent in the Family Court of WA which will lead to certainty of parental status for children born to overseas surrogacy arrangements. Rachel recommends that parties seek legal advice before making any application; especially as admission of a criminal offence may be involved.

Noting that Western Australian Lawyers should avoid facilitating commercial surrogacy arrangements, there are very few WA lawyers who will advise clients before they embark upon an international arrangement, other than to advise against it. Even when advising against international commercial arrangements, it is essential to be across the ever-changing developments in ‘popular’ overseas jurisdictions.

Several international clinics employ agents within the Commonwealth of Australia who will falsely advise commissioning parents about the legality of their arrangements and their legal status of parents[8].

[1] The forms to be completed by clinics are available to view on the Reproductive Technology website at http://www.rtc.org.au/information-for-clinics/

[5] The Northern Territory is the only commonwealth jurisdiction which does not have legislation governing Surrogacy Arrangements. Arguably there is no prohibition on surrogacy in that territory. However, the clinics in the Northern Territory are associated with South Australian clinics and generally operate under the NHRMC guidelines and South Australian Legislation